This is a question quite a few of you have asked me, the answer is YES! Here below is the image of a cheque I received from GOOGLE ADSENSE recently as payment for the ads they display on my Blogs. 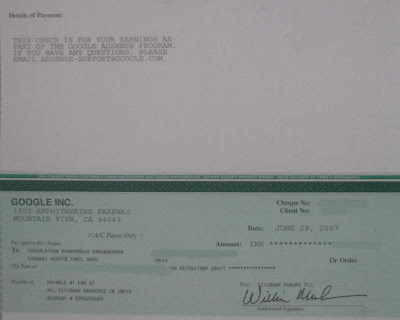 Google AdSense claims they display 'relevant Ads' on my blogs, though at times I wonder at times how Internet Security, Credit Cards, Loans or Job Search are relevant to my Blogs. I get paid for every Ad you the readers of my blog click, I also get paid for the Ads you click in the search results.

I won't claim to be an expert in milking Google AdSense but here are a few tips:

I travelled by bus after a long time, it was not by choice, the health camp I had to go was too far from the city and I was warned the roads were too bad to risk a bike ride. I got on one of those colourful buses with comfortable seats till Poonamalee. After observing several foot board-full buses from a distance I somehow managed to get into a bus to Sriperambudur where i actually got a seat. The bus was soon crowded, with all sorts of people, with many industries in that stretch, there were many office goers too.

I watched a fairly good looking young women get on the bus, she was wearing some sort of uniform with her company name stitched on her shalwar's arms. The conductor kept walking around the bus issuing tickets and asking people to move 'inside' the bus. A group of five young men came and stood next to me and the young woman, it was obvious those fellows were good for nothing. I could either look outside the window or watch just this crowd around me, which I did for a major part of the journey.

First, they started making indirect references to the girl in their loud conversation making jokes among themselves. I didn't know at that time if the girl didn't understand or if she was ignoring them. After a while as I gaped in surprise the bunch of perverts started started falling against her and brushing against her and groping her quite obviously. The woman would once in a while turn back and stare for a few seconds, I kept hoping she would do something, slap those guys maybe but she didn't even open her mouth. At least 3 from the group took turns in gaining some sort of perverted pleasure from the girl. I kept hoping that maybe she was some sort of plain clothes police woman who would have her gang of waiting cops when one of the the bus stop came...

Nothing of that sort happened... she just gave a silent stare once in a while. It seemed to me she was used to it but wasn't bold enough to react in public, the guys were obviously not newbies to this. I was frustrated hoping the woman would do something and hoped some sort of justice would be done on the spot. But nothing happened my thoughts started running like a train.

I wondered how Prathiba Patil becoming the President of India would not make a difference to this woman, yet all those politicians claimed that singular act was the crowning glory of women empowerment. She's just a symbol, she would make no difference, no one would look up to her, no one would be inspired by her, she would be confined to the history books and faded memories the moment she walks out office like the many before Dr. Abdul Kalam. The office of head of the state is only symbolic, yet the symbol seems to have so many skeletons in her cupboard that no non-political Indian citizen is ever going to look up to her... she's probably the most undeserving President of India ever, then what good is the symbol? What's the point?

I thought of Sonia Gandhi, arguably the most powerful person in this country, what has she done for this woman, what could she do this woman... I thought of Blank Noise, maybe a a group of elite women who don't get on a bus often... maybe not... but they couldn't help this woman today. So what difference does their existence make to her? It has been programmed into my mind that education and employment empower woman, all that crashed, it couldn't give the woman enough power to stand up... The bus stopped at the gates of some company, she got down, there were no policemen waiting, nothing happened, the guys vanished before I got down.
Should I've done something? I kept thinking, I knew what I wanted to do, I only waited for her to just utter one word in protest or a tight slap. Does a person who can't stand up for oneself deserve help from others around?
Blogged by Prahalathan @ 23:06 10 comments
Labels: Society People

A battle between a pride of lions, a herd of buffaloes, and 2 crocodiles at a watering hole in South Africa's Kruger National Park. Trust me you don't wana miss this!