Taking a lot of people along towards a common goal is difficult, especially when ties are weak and communication is broken and you don't know who are all the people. Towards late 2006 - early 2007, from my perspective, it seemed, everything was going awry.

In BM, a few months earlier we had started drafting a 'constitution' to formalize a rule book for the informal group. Someone was naïve enough to think that we were the first such group to do so, I even remember picking up silly arguments over that… A lot of people started quitting for various reasons and I had a lot of trouble keeping up. When Santhosh (then employed at a PSU, now full-time AAP activist) who used to lead the drafting team quit, the mantle fell on Abhijit (then a civil services aspirant) and me. Everything seemed to be up for debate why the name Bhumi, why did we register Bhumi and in Chennai, specific clauses of the rules drafted several months before, our intent etc.

What made matters worse was a lack of clarity on who was raising questions and why. People who seemed to have become inactive were suddenly popping up to raise questions or share their thoughts. I seemed to be performing an important responsibility. But among a virtual, mixed age group of people without strong ties, I felt powerless and crawling in a minefield. Personally too, it was an extremely challenging time and it was quite a roller coaster going down. At times, I had self-doubt whether it was all worth it. During that period, Gyan who was already disillusioned with the national group urged me to focus only on the work we were doing in Chennai and the staunch practical support of my friend Abhijit kept me going.

When I look back at this phase and connect the dots, two aspects of the organisation and its culture stemmed from here. The youth-only age bar protected the fledgeling group as we matured on our own. A strong bias for action came out of an aversion from people who only gave ideas or raised questions.

Have often had you been grateful for the tough times when you connected the dots? Leave a comment. 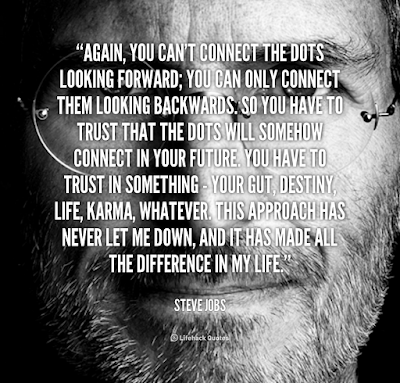