What's the value of a Co-founder?

Sometime back a friend reached out to me for advice on how to handle challenges in another founder-led organisation. It was another occasion to reflect how Bhumi was a vastly different organisation primarily because we have active co-founders.

In the early years, there were several key people and volunteers who played a role in bringing our informal group to the stage where we formed and grew Bhumi. While there were many 'founding members' (more about them in the coming months), there were just three co-founders. The value of an equal, active co-founder in the non-profit sector is hard to measure both within and outside the org.

We hardly did any conference calls then apart from our monthly meetings. Hari and I would connect often to align. Since Hari and Ayyanar were childhood friends, they used to discuss a lot and do things together. Hari played a significant role in the first few years until he left for the US. It was not until after that, I started working a lot more with Ayyanar directly.

While Ayyanar has largely focused on the programmes, I have largely focused on the organisation. Often Ayyanar shares how he has taken leadership learnings from Bhumi to his corporate job and vice versa, I have largely learnt a lot from/shared with the eco-system. While Ayyanar is more intuitive with people and connects more easily, he largely remains in the shadows and I have been the face of the organisation both externally and internally. While we do have long discussions, debates and disagreements, there has never been a major conflict in all these years.

But the most important thing is the hardest to see and is a culture that must be experienced. When there is not just a single 'founder' or 'leader', ownership is shared, which has then made it easier to create a culture of shared ownership with every Bhumian.

Thank you Ayyanar for being who you are, for all the shared moments, achievements, and learning. Wish you a very Happy Birthday! 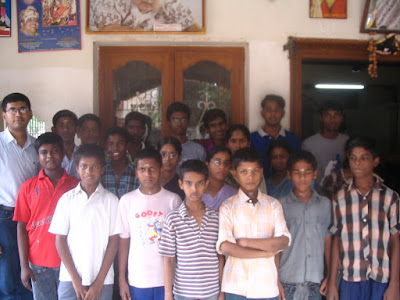 From L>R I am standing with Hari, Malli and Ayyanar in this picture taken at Anbu Karangal in 2007