Siragugal 2009 was a one day Art, cultural Fest held on 15 Nov, 2009.  796 children from classes 1-12 of 26 orphanages in Chennai, Kanchipuram and Thiruvallur Districts participated. The event consisted of  16 different competitions for three age categories, a science exhibition competition, fun events including a magic show and a theatre workshop for the children. 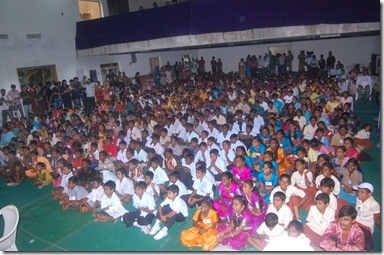 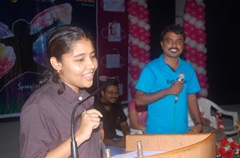 In spite of the heavy rains the children made it to the the venue, Chinmaya Vidyalaya, Kilpauk thanks to the buses Sponsored by Velammal Educational Trust. Siragugal'09 was inaugurated by Ms.Archana Raghuram (Cognizant Outreach), Mr.Kannan (Chinmaya Organisation for Rural Development), and Mr. Mukesh (playback singer of ‘where’s the party tonight’ fame). An electrifying performance by Mr.Mukesh and Bhumian Ms.Aakansha set the tone for the day getting the children and volunteers into a frenzy. 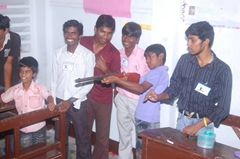 The children then spread out across the venue as six events started simultaneously. The morning session consisted of events like group song, solo dance, quiz, English and Tamil elocution, Tamil essay writing, Tamil poetry, drawing-painting, mimicry and monoact. While Siragu Montessori School delivered a prize winning traditional  villu paatu  during the group song event, many enthusiastic children drew and painted their message to society (“Say no to child labour”, “Give life by donating blood”, “Educate children” and the like). 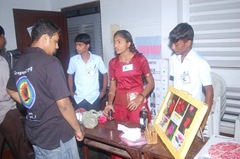 In the meanwhile, the six game stalls including balloon shooting etc and the Science Exhibition which had models prepared by Bhumi's Little Einsteins Team and also those brought in by the children for the competition were thrown open to all participants. The children and Bhumi volunteers displayed their scientific models, and actively explained the theoretical concepts to the other children. 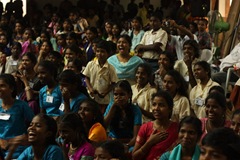 Immediately before lunch Magician Elango‘s show, a surprise element for the children doubled up the energy and the excitement in the auditorium. Lunch was sponsored by Cognizant Outreach and Food King. 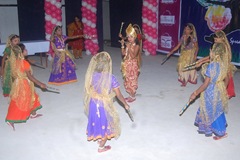 Post-lunch events commenced at the respective venues – Tamil skit, soap carving, pot painting, rangoli, group dance, and solo song. Despite the registrations being closed before the event, groups of children turned up with requests to participate in art events like soap carving and pot painting turning the venue into a colour riot! Meanwhile at the auditorium, an outstanding performance from a child who participated in group dance was asked to perform Solo on demand. His moves to the title song from the movie Villu  had the audience on their feet for a standing ovation! Definitely a moment that will be remembered by all those who were present there! 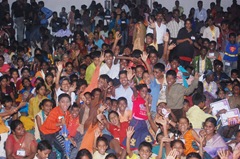 The valedictory function marked the close of Siragugal’09. Our Chief Guest ‘Food King’ Mr. Sarath Babu delivered an inspirational speech to the children. The guests of honour for the evening were Mr. Balasubramanian and Mr. Sattainathan (SBI, one of our sponsors). The guests distributed the certificates and medals to all the prize winners.

And the Awards went to! 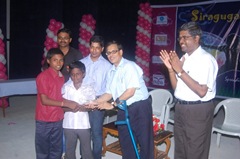 Best Individual Performer, Male -- Mst. Udayakumar from SISTWA who stole hundreds of hearts with his realistic mimicry concept that revolved around the dancing styles of actors Kamal Hassan, Vikram and Vijay 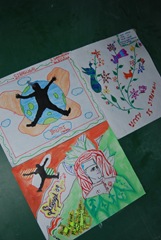 Volunteers from Chinmaya Organisation for Rural Development (Thamaraipakkam), Cognizant’s Outreach, Infosys’ Sneham and NCC cadets from college of Engineering, Guindy contributed with zest equivalent to that of the organising Bhumi volunteers.

We are deeply indebted to our Sponsors including Cognizant Outreach, SBI, Infosys Sneham, Food King, Velammal Educational Trust, Welmech Engineering, Sniper Systems, ISHRAE and over a thousand individual donors also contributed towards the finances of the event. 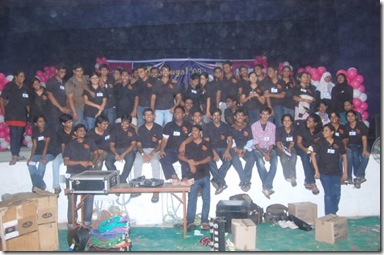 A bigger and better Siragugal 2010 beckons! Siragugal '10 will be a two day Art, Cultural, Science, Athletic and Sports Fete. See you all again in July 2010!