Volunteers kept joining us every week and we quickly decided to start a second centre. We wanted to start in a slum community, hence we found an organisation that was working in Pudupettai community in Chennai.

I went to their office in Egmore, Chennai for permission. They were surprised we were not a 'registered organisation' I was questioned a lot about that, I explained about the informal nature of our group. They requested us to request permission on a letterhead. I quickly put together a letterhead and went there again and they permitted us to start our weekly classes. The organisation CODIAC was conducting skill development classes in the rooftop of the Govt housing board building and they agreed to share the space with us for our classes. Their staff would be present at each class too (To the left of the group pic)

On July 1, 2006, we had our first interaction with the children, an ice breaker. We played a lot of games with the children. What I remember from that day is Prakash teaching the students Karate. 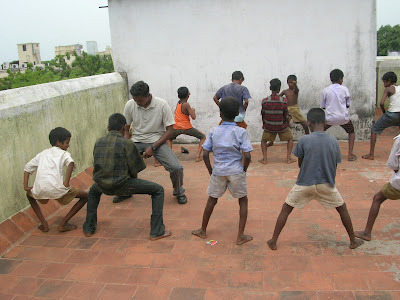 We asked them what we could teach and listened to them. The children wanted to learn English, Computers, Maths & Science. It was similar to what we understood from the children of our first centre. 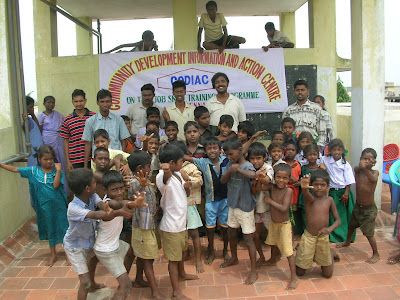 From L>R Raghav, Ayyanar, Prakash, Suren & Swami. I'm missing because I was the photographer :)

I used to be a frequent visitor to the Computer market on Ritchie Street at least once a month during those times, I never realised there was a huge slum beyond the bustling marketplace.

This is quite common in India, but, have you been surprised similarly? Leave a comment